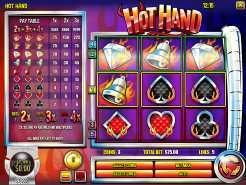 Play Now
Hot Hand Slots is a hot and fiery slots game that has three reels and one payline. This game from Rival Powered Gaming can be played for fun or players can opt to directly play the real money version of the game. Within the three reels and one payline of the game, players can choose to place one, two or three coins per spin using a variety of coin sizes. The highest bet possible per spin is $75 using three coins and players can also place bets of $0.03 as the lowest bet using all three coins. Symbols in the game are all surrounded by burning flames and include bells, cherries, clubs, diamonds, hearts, sevens, spades and an image of a she devils.

All the winning possibilities are detailed on the main screen of the game where the player can also see the reels. The highest payout is awarded for lining up the three wild symbols in a row on the payline. The wilds are 2x that appears on the first reel, 3x that appears on the second reels and 4x that appears on the fourth reel. Each of these when appearing on its own will substitute for other symbols and complete winning payouts by doing so with the multiplying factor that it offers. The highest payout awarded is 4500 coins awarded when the player lines up a 2x, 3x and 4x symbols on the payline with a three-coin bet. With a two-coin bet and the same line up, the player wins 3000 coins and with a single coin bet and the same line up, the player wins 1500 coins. Hot Hand slots is a heated fun and easy to play game that offers some fabulous winning options and can be played online or on mobile devices.
Play Now

Where to Play Hot Hand Slots