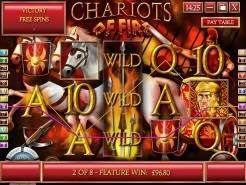 Play Now
The chariots are blazing and the soldiers are gearing up to fight. This is a game of power and dominance, the Roman soldiers do not want to lose their precious city and as a result they are fighting for it with all their might. Symbols in this five reel twenty five line slots game reflect the many different aspects of this fighting army with the emperor at the head of the team. Players may try out the game for fun before placing real money bets and this gives them a little insight into how the game works but the real experience always comes from the real money games.

During the base game, there is an expanding wild symbol on reels 1 3 and 5 that when appearing takes over the whole reel and the wild can substitute for other symbols giving the player more winning opportunities. Eight free spins are awarded when three or more of the soldier symbols appear on the reels. During the free spins all winnings are doubled and if three of the super soldier icons appear the player receives a further two free spins in the Roman Victory special round. These Roman Victory free spins also benefit from a 2x multiplier for any winnings. During all the free spins the third reel remains wild for the duration of the free spins.

Symbols in this fiery game include a shield, a helmet, a crossbow, a flag, a woman, a horse, an Emperor and of course the soldier. The player can choose to place single coin bets or up to 10 coins per spin and the player can choose the coin size that best suits his needs and budget. This is an exciting and rewarding game that leaves the player with a sense of purpose and achievement as if he himself had defended Rome.
Play Now

Where to Play Chariots of Fire Slots