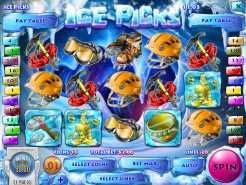 Play Now
Starting with a small introductory movie, players learn why they are taken to the coldest areas on earth in order to save some of the stranded visitors and uncover the treasure that has been left there. This game has five reels and twenty paylines, it offers an auto play option for those that want to preset the number of spins the game runs for and there is also an opportunity to try out the game in fun mode before placing real money bets. Players can place up to 10 coins per line per spin with a total maximum bet of $50.

During the base game, the wild appearing on the screen will take the place of other symbols and multiply the winnings 4x. Three and more of the compass symbols on screen trigger the super round where players are rewarded with free spins. Three of the compass symbols trigger 7 free spins, four trigger 15 free spins and five trigger 30 free spins. During the free spins, the wild appearing multiplies winnings by 8x when it is used in a payline. There is an added feature in this game that is triggered when three or more of the same frozen symbol appear on the screen. Players will then see symbols drop off the screen and shatter, to be replaced by further symbols giving players more chances to win. There is also a bonus game triggered when three and more of the bonus icons appear on screen. Players are invited to pick symbols that will reveal bonus payouts. Despite the chill factor of this game, there are some wonderful paying options and plenty of fun to be enjoyed.
Play Now

Where to Play Ice Picks Slots