Can you Bust-a-Vault to win a prize? 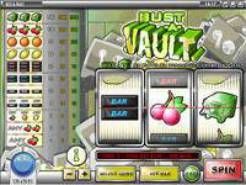 Play Now
Some games have titles that immediately grab you. Bust-a-Vault makes it sound like you have a chance to do just that. So let’s see whether this 2D game from Rival has enough to keep you interested.

How many reels and paylines does Bust-a-Vault have?

This is a traditional game of the classic three-reel variety. There is just one payline here, but the game does have a little more to share.

What could you expect to wager on each line you play?

The lowest bet here on the single payline is one cent. As you might expect from a single-payline game, there are plenty of coin values to choose from. The biggest is ten dollars, so this game is good for people with all kinds of budgets to work with. You can also opt to play one, two or three coins on that payline. As you select your coins, a vertical bar changes position on the left-hand side. You’ll see the pay table there, so you can always see how many coins you’re playing and what the prizes would be for certain combinations. You can only win the jackpot if you play the maximum three coins on the payline.

Does Bust-a-Vault use any special symbols?

Yes, there is a wild symbol, which is a green vault. This can help boost any prize you have that includes the wild symbol in the combination. Furthermore, three vaults will trigger the top prize.

Will you have a chance to play a bonus round?

No, as you might expect, this game doesn’t have a bonus level. However, with that said, you wouldn’t generally expect there to be a bonus round with a single-payline, three-reel game. So maybe you won’t miss it if you’re playing the game anyway.

If you like your slot games to be more involved, with lots of paylines and chances to win with each spin, Bust-a-Vault may not be the game for you. However, if all you want is a single-payline game that offers plenty of opportunities to wager some cash, this is the one for you. With traditional symbols and, of course, the vault itself, Bust-a-Vault could result in you winning some great prizes. Just watch the pay table to the left and see whether you can trigger any memorable combinations to take home some nice prizes!
Play Now

Where to Play Bust-a-Vault Slots