Roll Out the Barrels Slots 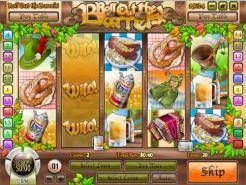 Play Now
"Roll out the barrels, we'll have a barrel of fun" is how the evergreen song goes. However, in this case the barrels referred to here are barrels of beer as this is a slot machine that is themed around the biggest beer festival in the world, Germany’s Oktoberfest. It takes place in a bar at a Bavarian Beer Festival where the beer is served by some very buxom and bonus awarding barmaids. This beer festival takes place each year in Munich, Germany. It takes 16 days from start to finish, during which time over 6 million people enjoy what it has to offer, coming from all over the world, not just from Germany. It’s been around for more than 200 years, being first held way back in 1810. There's also plenty of other stuff to enjoy at this beer festival with pretzels and bratwurst available for those feeling a little peckish, whilst accordions provide the traditional music, amidst the sound of cuckoo clocks. Those famous green alpine hats with red feathers in them are also the order of the day. It would be rude to attend the beer festival and not sample a good helping of the local nectar, and you can do this by lining-up 3 to 5 bottles or steins of beer, which respectively pay up to 60 and 125 coins. You'll also get paid for sampling Bratwurst with fried onions and big tasty pretzels at 65 coins and 100 coins. You will find that the game’s 5 reels have a maximum of 20 active bet lines during each spin, and that the symbols include among them features like bonus games, expanding wilds, free spins and multipliers. A jackpot of just $6,250 is the most you can win through its best combinations. The features tend to be quite good, though not out of the ordinary. They tend to use expanding wilds, free spins, multipliers and bonus games in many of their slot machines. The expanding wild is in this case represented by the image of a barrel of beer. You’re going to discover that it appears on just two reels, 1st and 2nd, but that it can be extremely useful from those positions, expanding to cover the reel entirely when it is able to substitute for another. The result is the formation of a combination, which is pretty much guaranteed on all the lines if you happen to get both expanding wilds on their reels. It can be a profitable feature for players. Show some skills with the accordion for 250 coins, or just listen to the cuckoo clocks for 400 coins, but do it all whilst wearing an alpine hat – as lining-up these can pay up to 500 coins. The Alphorn that is being blown by a local is a musical instrument that is often used in the area, and whenever you see it appearing in multiple spots you will know that you’re about to win a round of free spins. Finding 3 or more of them will trigger the Free Spins bonus. 3 triggering horns will award 15 free spins, 4 triggering horns will award 25 free spins, and 5 triggering horns will award 50 free spins. 3, 4 or 5 scattered symbols of this type gets you 10, 20 or 75 free spins, respectively. In each case, you get a 3x multiplier as well. Expanding Wilds are a whole lot of fun too. Not only do they fill the entire reel with beer, but they'll also substitute for all other symbols to help make you lots more winning prize-lines. During Free Spins they will also come with a 2x multiplier. However, should you spin-in 3 or more Horns during a Free Spins bonus, all prizes containing Expanding Wilds will then be multiplied by a special x3 Multiplier. The blonde beer maiden, the most attractive symbol the game offers, acts as a bonus symbol. Her appearance in at least three locations, anywhere in the game, gets you access to a bonus feature. You simply have to pick from among the barrels that are ready to be used, and you will be rewarded with prizes. You'll certainly want to meet plenty of buxom barmaids as, not only are they extremely pretty and voluptuous, 3 or more of them appearing at once will also trigger the Barmaid Bonus. In the bonus round you will be asked to carefully select beers for customers, and you'll win a prize for each satisfied customer. This fantastic Bavarian Beer Festival doesn't have to cost much to get into either, and 1 to 10 coins and coin-values of 0.01 to 0.25 can be combined to make line-bets, which can then be bet on 1 to 20 lines per spin. This allows a minimum bet of only 0.01 coins a spin for those seeking less risky play, and a maximum bet of 50 coins a spin. The entire betting range for Roll Out The Barrels is from $0.01 to $50. Using coins that are worth anywhere between $0.01 and $0.25, the slot allows for up to 10 to be chosen for each line, with 200 coins total for the largest bet. Its value would be up to $50. While you can walk away with 25,000 coins from this slot, or 2,500x the line bet, cash wise its value would be only $6,250, since the denominations are quite low. Symbols: Barrel of Beer (wild), Beer Maiden (bonus), Alphorn (scatter), Beer Drinker (2,500x), Bavarian Hat (400x), Cuckoo Clock (375x), Accordion (300x), Lederhosen (250x), Bavarian Beer Mug (150x), Pretzel (100x), Sausages with sauerkraut (65x), and Beer Mug (60x). The Oktoberfest theme was well chosen and the characters and the various foods being well enough made to make you want to be there and enjoy yourself. Though it uses a cartoon style, so it’s not entirely realistic, you’re going to enjoy the game anyway. Each symbol that is used has a cute little animation that gets triggered when it’s part of a combo, and even the expanding wild turns from a barrel into a beer filled reel. So join in this German feast and start winning right away!
Play Now

Where to Play Roll Out the Barrels Slots

Roll Out the Barrels Slots Info