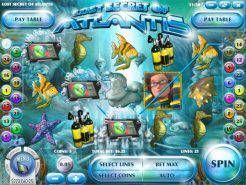 Play Now
Deep beneath the ocean’s surface is the mystical underwater city of Atlantis, or so says the fairy tales. Themed around this fantasy is the new slot from Rival, Lost Secret of Atlantis Slots. This slot comes with 5 reels, 25 pay lines and absolutely beautiful graphics in vibrant colors. With an expanding Wild, a jackpot symbol and bonus features, Lost Secret Of Atlantis is a thrilling online slot game you won’t want to miss out on.

Before taking a spin on the reels of Lost Secret of Atlantis Slots, it’s important to set up the wagering and betting preferences. Players can choose from coin sizes that range between $0.01 and $0.25. They then must select the lines they’d like to activate. Lastly, they need to specify how many coins they’d like to wager on each line. This three step process of wagering is very important when it comes to the pay out process. Players may find themselves disappointed if they land a winning combination on a line they don’t activate, or if they don’t get the highest pay out because they’ve not wagered the maximum amount. So, it’s very important to figure out what you can afford to do and what you’d like to do when it comes to wagering, before you even take the first spin of the reels. The game also comes with “Bet Max” and “Auto” features for those players who prefer to have the game play itself.

The Lost Secret of Atlantis Slot symbols are right on theme, as expected. Players can expect to see symbols that include, Ancient Statue, Explorer, Fish, Golden Ring, Oxygen Tank, Sea Creature, Sea Horse, Sea Shell, Shark, Starfish, and a Submarine. The game’s Wild symbol is the shark. This Wild will actually expand, which makes it even more interesting to land. It will replace other symbols to help players create wins. In addition, it comes with a 3x multiplier, which is even more thrilling. The Scatter symbol is the submarine symbol, which will activate the Free Spins Bonus feature if a player lands three or more of them. Any wins that are created during the free spins rounds come with a 3x multiplier. If the player lands three sub symbols then they will get 10 free spins. If they land four subs they’ll get 20 free spins and if they land five subs they’ll get 75 free spins. The jackpot symbol of Lost Secret of Atlantis Slots is the ring. If three or more are landed players will be awarded with coins. Three rings will pay off with 50 coins, 4 rings will pay off with 200 coins, and five rings will pay off with 1000 coins.

If a player is lucky enough to land three or more of the green creature symbols in the game, they will be whisked away to the bonus mini game. This game consists of the player being asked to pick one ball from a collection of blue metallic balls. The player will then win whatever prize is associated with the ball they choose.
Play Now

Where to Play Lost Secret of Atlantis Slots