As the Reels Turn 1 Slots 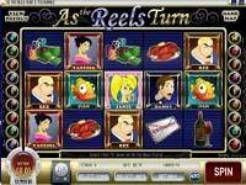 Play Now
If you want to experience the thrilling highs and lows of a casino, the loves, and the heroes as well as the villains, then you can find no better place than As The Reels Turn With Friends Slots. It is the first in an exciting trilogy of slot games by Rival Gaming. You can win great prizes for meeting characters including the prettyChrissy, the casino manager Matt, and Don, the Head of the local syndicate. There is an Elvis Impersonator called Tommy Wong, and there is Ivan the Piranha, two of the game Scatter Symbols. They can trigger the Tommy Wong Bonus Feature with 10 free spins and double your prizes. There are mystery bonus rounds, a storyline that advances with each new step of the way when you line up special symbols. The slot game has so much going on, and it has certainly got something for every player. There is an excellent range of pay lines, coin and coin combinations which can all be combined to suit everyone's taste, and the betting starts from $0.01 coins per spin.

About the game and developer

The game is delightful, and it can keep you spinning the reels for hours as you advance through the intense storyline. The game has a decent RTP, and the Scatters and bonus rounds add even more spice to the game. The free spins come with 3x winning multipliers, can be extremely rewarding as well. As The Reels Turn slot machine is the first of a trilogy of video slots. If you like online casinos and the experience of the ups and downs of casino games, you will love playing As The Reels Turn' slots for real money, free using the demo play mode, as well as with Bitcoin cryptocurrency at one of the recommended casinos listed on our page. Rival Gaming has already made two sequels to the game, and the second is called As The Reels Turn 2: The Gamble. The third version is called As the Reels Turn; Blinded By Love. As The Reels Turn slot machine features five reels with 15 pay lines. Rival software powers the video slot machine that you can play in your Internet browser with no download required for fun or with real money, using instant play mode. As The Reels Turn Episode 1 slot invites you to join now as you begin your journey through the multi-tangled web of the lives of the lovers and losers, the heroes and villains, and the players and pawns at the El Paradiso Casino in the continuing saga called As The Reels Turn. We are making you an offer that you can't refuse, the mob guy says, and you are gonna get great 5 reel slot to play, with fun bonus rounds, that will really melt all that cheese on your pizza. You get the inside scoop on what really happens on the casino floor and behind closed doors at the El Paradiso Casino club by following the storyline of As The Reels Turn Episode 1 slots. You will get to know my associates and me a lot better. And maybe you will have the smarts to solve a mystery?

As the Reels Turn is a mafia-themed slot by Rival Gaming that has a storyline unfolding as you play the slot game. You will discover what is going on in the casino and behind the scenes of El Paradiso casino. The game features no less than 7 different stages where you will need to find four Scatters and two Jackpot symbols! As the Reels Turn is a 3 x 5 slot game with 15 pay lines and a total of 8 regular symbols, and 4 Scatters, and as you play the game, you advance through the exciting storyline. You will advance to the next round of the game, and the next scene when you land 3 As the Reels Turn Scatters on your reels. There are a total of seven stages, and you get a total of 3 obligatory bonus rounds as you advance through the scenes and stages. You can easily track your progress at any time of the game by clicking on the Game Map. Three or more Tommy symbols trigger the Tommy Wong Feature Act Bonus Round. It's a simple pick a prize type of bonus game, where you'll get to choose which act will Tommy choose for tonight among four acts, and you'll get a coin prize.

You would expect a game with so many twists and turns to cost that bit extra; however, it does not! Then just choose to play 1 to 15 pay lines, then bet 1 to 5 coins on each pay line, then apply coins values ranging from $0.01 coins to $1 coin. That allows you a minimum bet of $0.01 coins a spin and a maximum bet of 75 coins per spin. Lobster and red wine might be okay, exquisite dining, however, at up to 100 coins, they are more like a starter in the game. You win up to 200 coins for meeting Chrissy, Matt or The Don himself. If you line up the Chip-Stack icons or the El Paradiso Casino symbol and you will win up to 1,000 lovely coins. The slot game gets more exciting with the arrival of the Scatter Symbols, which consist of Tommy Wong, Ivan the Piranha as well as the Bonus Icon, as they can all release instant wins for you of up to 50x your triggering bet if all 5 appear on the reels with any spin. 3 or more of them will also reveal some bonus games, with Ivan the Piranha awarding 10 free spins with double prizes. In the meantime, if you get awarded the Tommy Wong Bonus Feature, you choose which famous artist you want to imitate that evening, and you get paid according to the crowd reaction. Three Bonus Icons reveal a mystery bonus, while 3 or more Advance to Next Scene Symbols sees you following the Game Map to a new, exciting, and undisclosed level.

Bonus Round and Free Spins

Ivan, the Fish, is the Scatter that will trigger the free spins, and when you land 3, or more, you get ten free spins with a 3x win multiplier. There is another Scatter that triggers the Bonus Round when you land 3 of them. Apart from the four Scatters, there are eight more symbols in the game. 2 are called Jackpot symbols and are actually higher win icons which you must align on a winning pay line to get paid, and the remaining 6 symbols are then divided into two distinct groups. The medium winning symbols are The Don, Matt, and Chrissy images, which all pay out the same, with a decent amount. The lower paying symbols all pay the same and are modest prizes.

It is vital to keep the sound for this game on, as only then will you be able to enjoy the intense story as the dangerous characters talk to each other. Every scene has its theoretical RTP percentage since this is a Rival Gaming slot, you can expect that in its entirety, this slot game has around 95% RTP, or slightly higher. Since this is a slot with an in-game progress system, it allows for different betting amounts depending on wherever you happen to be in the game, and how close you think you are to triggering the bonus round which, which will give you a massive coin win. In scenes that do not trigger a bonus round, you can go from one to another betting lower, which are scenes 3 to 4 and stages 5 to 6.

Play for fun and real money

You can spin the magic reels if this classic slot using the free play demo version. You can later switch to real money wagering then when you have learnt how to play and win with the practice version of As the Reels Turn. It is an excellent manner to learn the game system and get used to it before wagering real money. Furthermore, you can just play for fun and entertainment whenever you like, on your mobile or your desktop.

Mobile play for iOS and Android

You can play this Rival casino slot game using your mobile smartphone as well as your tablet like your Apple iPhone. There is, however, no progressive jackpot in the game; however, there are many ways to win, and this is an entertaining game to play for actual cash on the net. The game is available to play using Flash-based Instant Play mode without having to download the slot to your mobile device. Rest assured the game is adequately compatible with all iOS and Android mobile phones, tablets and laptops.
Play Now

Where to Play As the Reels Turn 1 Slots

As the Reels Turn 1 Slots Info