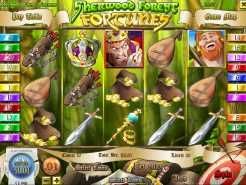 Play Now
Both Maid Marion and Robin Hood together with some of the merry men make appearances in this semi animated slots game that has five reels and twenty paylines. Players may try out this game in fun format before placing real money bets using a variety of coin sizes. The highest bet per spin possible is $50 and players can choose which coin sizes they want to use based on their own personal budgets.

In this game the evil Sheriff of Nottingham who wants to kill Robin and take Maid Marion as his own is also the highest paying symbol giving players 10000 coins when five appear on the screen on an active payline. Robin is the wild symbol and appears on reels 1, 3 an 5 where he can expand to cover the whole reel and give players more chances to win. The Maid Marion is the scatter and she is the trigger for the bonus free games given to players. Three of the Maid Marion symbols on screen award the player with 5 free spins, four triggers for the player 10 free spins and five triggers for the player 25 free spins. During these free spins all winnings are tripled and the player may be lucky enough to trigger further free spins. There is an additional bonus game triggered when three and more of the arrow bags appear on screen. Players are taken to a new screen where they are invited to shoot the arrows and in this way they can win further cash payments. This game is centered around a legend who stole from the rich to give to the poor and in this game the players may also be lucky enough to strike rich.
Play Now