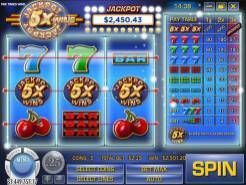 Play Now
If you like a bright, vibrant, yet simple slot game to play, Jackpot Five Times Wins could well be the one you have been searching for. This is an eye-catching game designed to draw you in, and it certainly managed to achieve that with us. Will it do the same for you, though? There are several reasons why you might want to play this game, but before you do, read through our in-depth slot review to learn more.

This game comes from the brains at Rival Gaming. Need we say more?

The game can be played in demo format, which gives you a chance to see how everything pans out if you were to play for real. Of course, prizes are ‘won’ in demo credits, and these remain with the game. It does, however, give you a proper feel for the game and whether it might be right for you to play.

This is a basic slot, offering the best mix of classic symbols on the reels. Expect to see some juicy cherries, along with various colors of 7s and bar symbols with one, two, and three bars involved.

The design is as simple as the theme, yet it is very effective. You can see a blue backdrop in place, although this is minimal because all the attention is on the giant reels and the other elements of the game.

Let’s get down to basics with Jackpot Five Times Wins

Right – there are three reels here, as you might have guessed given what we already know about this game. And yes, there is a jackpot too – a progressive one. This appears in lights (or at least with the illusion of lights) above the reels. This is won by finding three 5x icons on a paid line. The game does have a wild symbol, which is shown as the Jackpot 5x Wins logo. This is different from the jackpot logo, even though both show a 5x multiplier icon. Not only is this one a wild icon, it carries with it a 5x multiplier as well, in line with the title. So, any prize with this contributing to it would be worth 5x its usual amount.

How many paylines are there?

There are three, and these are indicated by the red lines running straight across the reels.

Get ready to place your bets...

The game allows you to play one, two, or three coins per line. You should be aware that the progressive jackpot can only be won if you wager three coins on a line that triggers it. If you play one or two coins and get three jackpot icons on the qualifying paid line, you will get 1,500 or 3,000 coins respectively. You can choose coins worth from a cent to $5 a time. The default is 25 cents, so check and see you are happy with that before wagering.

An easy-to-spot paytable is in evidence

As is common among three-reel slots, you can find it to the right of the reels. This keeps everything on the same page, making it easy to refer to the table whenever you wish.

Does the game include a bonus feature?

Can you scoop any free spins?

No, this is a basic three-reel slot apart from that 5x multiplier wild.

Do we know what the game’s RTP value is?

It has been mentioned as 95.5% on some sites, so this could be a probable percentage. Progressive jackpot slots tend to have a lower value than standard ones, because they put a portion of each wager into the big pot.

Think of this as a new improved version of the original Five Times Wins slot game. Who wouldn’t want to play for a jackpot? Even if you only play one coin though, you can still be in for a chance of winning a fixed jackpot amount as mentioned above. The 5x multiplier wild is the other highlight and is arguably easier to find too. We rank this as an 8 out of 10 three-reel slot.

How often does the jackpot drop on this slot?

We have looked at recent winners for this game and it appears to drop on average every 15 weeks or so. That is just under four months, but of course, it varies depending on when the prize is won. The average jackpot prize is worth around $96k!

Would you play this slot game in demo mode?

It’s a good idea to play around with the controls in demo mode first, so you can see how everything works and whether your budget could stretch to a few spins of the game. Our advice is to make sure you can cover all three lines, and to see if you could play three coins to have a shot at the big prize.

This is among the most popular three-reel Rival slot games around, so why not give it a try and see what you think?

You can play on mobile too

If you prefer visiting your favorite Rival casinos on Android or iOS, you shouldn’t have any problem finding this game on mobile either.
Play Now