As the Reels Turn 3 Slots 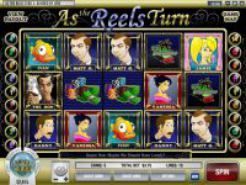 Play Now
As the Reels Turn, 3 Slots was launched by Rival Gaming and is the only slots and software provider to have i-Slots, which are storyline based slots. The intro of the As The Reels Turns 3 slots slowly show each character in play on the realistic and highly interactive slot, and that ensures plenty of action as you spin the reels. The symbols are the characters of Jamie, Mrs Livingstone, Danny, also Matt G, The Don and Vanessa. Ivan, the Fish, is there and so is an expanding wild Pampers the cat symbol. The expanding wilds only make an appearance during the free spins games.

About the game and software provider

Rival Gaming has released the latest instalment of As the Reels Turn, Part 3. The popular slots series is where this version, which is called Blinded by Love, the progressing tale of the El Paradiso Casino, and general manager who is Matt Gray and his hilarious companions. The game is a 5-reel, 15 pay line slot which is familiar with the first two instalments. You will notice that this latest version of the game takes you on a slightly different journey, with fewer bonus features; however, with a higher chance of increased your winnings in the bonus rounds. As part of the Rival Casino suite of games and software, As the Reels Turn 3 is part of a prestigious series of slot games that have been developed to add to your interactive fun with great features and an ever-evolving storyline

This slot features an interesting unfolding storyline that you can check back on by clicking the game map, which shows you the remaining part of the storylines you have yet to visit. If you haven’t played a Rival i-Slot, then this game is well worth a try and offers lots of fun, thanks to the interaction and the ability to alter the outcome of the story! The jackpot icon on As the Reels Turn 3 is the Poker Chip symbol. If you get 5 of them on active pay lines, then you win 1,000 coins. If you bet the maximum coins per pay line, and per spin is 5,000 coins.

The Next Scene image and Ivan symbols are both scatters and will trigger a winning payout for you if you get a minimum of 3 scatter game symbols. The Pamper cat symbol is also the expanding wild, and only appears during the free spins round. The wild symbol stands in for all of the other symbols on your reels to help you make and complete winning combos. It does not stand-in for the scatter.

The largest jackpot payout you can win playing As the Reels Turn, 3 is 5 coins by 1,000, which totals 5,000 coins. The maximum money value jackpot is $2,500 calculated as follows, with 1,000 coins multiplied by your maximum bet per pay line. With 50 cents by 5 coins, that’s $2.50 per pay line, which amounts to 1,000 multiplied by $2.50, equalling $2,500. You can win the top jackpot with 5 jackpot symbols, which are the Poker Chips icons. The betting range is the same in the third version as it is for the first of the second; however, this does not have a progressive jackpot. You start betting at a penny per spin and go all the way up to $45 per spin maximum

The Pampers is a different icon type that only appears during the free spins. They expand to cover your entire reel whenever it ends up on the screen. One of the Pampers symbols gifts you a 2x multiplier, with 2 of them giving you a 4x multiplier. If you get 5 El Paradiso symbols, the top jackpot rises to 1,000 coins, which will be multiplied by 5, which amounts to $5,000. All wins are multiplied by the coins you stake per pay line except scatters. If you get 4 El Paradiso symbols, the jackpot payout is 125 coins, which is then multiplied by 4, giving you a win of $500. A bonus feature is Ivan, the Fish, and the bonus is activated whenever Ivan appears 3 times across all your reels. The bonus feature gives you 10 free spins and enables Pampers, which are a cross between a cat and dog in a strange sort of way. Pampers will appear during the bonus round and expand to take up the entire reel whenever they hit. Pampers also acts as a Wild symbol, which means you could have a whole reel of wild symbols all going wild over and over again. Multipliers consist of 3xyour stake with one appearance by Pampers, and you get 4x if it appears twice. The next bonus round is the Advance to the Next Scene round. It occurs whenever that symbol appears 3 times across all 3 of your reels. At this stage, it is now time to play dress-up with a Danny Costumes bonus game, and the objective is to impress Jaime by choosing items of clothing for Danny to wear by stopping a chest of drawers, except that the drawers are opening and closing very quickly. Do this successfully, and you will put some cash in your pocket with the outfit you choose. Once that is completed, be prepared to be transported to the next, latest scene on your game map, which is basically a short animation of the ever-evolving storyline of the game. The first scene outside the gate involves Danny and is a rather intriguing tennis match, whereby he certainly meets his match. This is really worth seeing, but there are more scenes you can also uncover every time a bonus round is triggered.

You can win 10 free spins with multipliers of 1x when you get 3 or more scatter Ivan in view. The bonus game is the storyline that kicks in whenever you land 3 or more scatter Next Scene symbols. You have to help Danny choose a smart outfit to go on a date with! So select your gear, and make him look the most dapper so you will be rewarded with lots of cash! Make him look silly, and you are given a lower cash payout prize!

Instant Play games without registration for free and real money

All iSlots casino games can be played with Flash-based instant play using your web browser, and there is a downloadable version available for both PC and MAC. You don’t have to sign up at a casino if you use the free play demo mode and you can practice until you are ready to play for real money stakes and win cash payouts.

The game is smartphone and tablet compatible using the very latest HTML5 technology, which lets you play the games on your mobile anywhere on nearly any device including Android, IOS and Windows. As The Reels Turn, 3 i-Slots is a game you can play for free, or real money with no download, with instant Play mode. You can play the game using your mobile phone and tablet.

As the Reels Turn, 3 is an enjoyable game with a high rating of 4.5 out of 5. The RTP is around 96%, and the game revolves around a standard reels setup, with bonus features cut in half. However, you have the potential to make a lot more money during the bonus rounds and free spins, which is pretty appealing as well. One thing is for sure, the game has a great sense of humour, so try out As the Reels Turn 3 and get three times the fun!
Play Now

Where to Play As the Reels Turn 3 Slots

As the Reels Turn 3 Slots Info