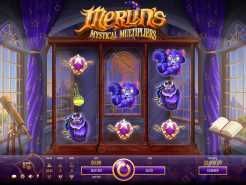 This game features three reels and five paylines running across a small grid. It essentially offers the same type of feel as a classic slot. Wins form when matching symbols land in a payline. Each winning combination requires exactly three symbols. Assuming you've played any payline slot before, then you'll experience no trouble adjusting to this one.

Merlin's Mystical Multipliers provides a very cartoonish look. First off, Merlin almost looks maniacal with his big grin and overly happy nature. He's also dressed in traditional wizard garb, including a purple hat with yellow stars and a robe. This game takes place in some sort of medieval chamber. The setting looks similar to what you'd expect from a wizard's lair. Merlin is famous for being part of the King Arthur legends. Some say he was even a real person who existed in Wales during the sixth century. Merlin's Mystical Multipliers doesn't incorporate either the Arthurian or (supposed) real-life version of Merlin into the gameplay. Instead, it just provides a fun take on the legendary wizard.

Symbols in this game include a wizard's hat, amulet, magical creatures, potions, a spell book, and Merlin. Again, you must land three of any of these symbols in a payline to win. Rival Gaming hasn't released any information on the maximum win with bonuses/multipliers includes. From our estimation, the top prize likely ranges from 1,000x to 3,000x your total stake. This maximum payout would be a little on the low side, but it'd still give a you a large payout nonetheless.

As the name implies, Merlin's Mystical Multipliers is built around multipliers. The goal is to land a 7x wild multiplier in your wins. These multipliers not only boost your payouts but also substitute for other symbols to form wins. Assuming you get just one wild multiplier in a payout, then you'll boost it by 7x. In this case, a 100x payout would suddenly be worth 700x your stake, for example.

The version of Merlin's Mystical Multipliers that we've played lets you put between $0.01 and $5 on each line. These options make for a betting range of $0.05 to $25 per spin. This slot also features an autoplay option. You can select autoplay to make the reels spin automatically with your chosen betting preferences in place.

No return to player (RTP) figure is available for Merlin's Mystical Multipliers. However, we'd guess that RTP falls into the 95% to 96% range. Volatility appears to be medium based on our session. We only lost a small amount of money after playing for a while. With just five paylines, you won't win frequently. But you will pick up some solid wins thanks to the multipliers, which help sustain your bankroll.

If you're on the fence about playing this game for real money, then you should consider trying it for free first. Merlin's Mystical Multipliers is available for demo play at Rival Gaming casinos. You merely need to register for an account to start playing. After doing so, you'll be able to play Mystical Multipliers as long as you'd like. Of course, you can always make a deposit and play for real money too.

Play on an Android or iPhone

Merlin's Mystical Multipliers is compatible with all major mobile devices. That said, you can try this game on the go as long as you own an iPhone, iPad, or Android device.